Since my state continues to treat me like a child that can’t be trusted with my records, I think I’d like to relinquish myself, to the state.  the problem is I don’t want to be a ward of the court.   Since I’m relinquishing myself I think I should be able to pick my new adoptive parents.

I was thinking the governor would be a good choice.  He can afford another kid, and let’s face it, the prestige would be nice.  I think it would be a mutually beneficial relationship.  He could get all kinds of publicity for adopting and I could live in the governor’s mansion.

I think it would be a great way to bring adoptee rights issues home to someone who could do something about it.  At all the family photo ops, conventions, and tree lighting ceremonies I could raise my fist and yell “GIVE ADOPTEES THEIR ORIGINAL BIRTH CERTIFICATES!!”.   I’m betting that could get something done fast.

We all should do it.  Just imagine if all the governors, in all the states that don’t allow equal access for adoptees, had tens of thousands adult adoptees trying to relinquish themselves to them…….

John Raible speaks out about the Russian Scandal..

Good stuff that needs to be said there.

Because we are building boats.

Like a lot of projects, this one started on a cold winter when anything seems possible in the coming Spring.  My husband ran across plans for simple boats on the internet, possibly after having a boat drink.  I have to admit it did sound fun to build our own boats and take them down the nearby river.  I’d probably had a couple of boat drinks.

Other than a one hour Mississippi River cruises on a paddle boat and an unfortunately dark lagoon cruise in Cancun, we’ve never really been on any other boats.  We’ve never taken a float trip or a cruise.

The sum of our knowledge amounts to the fact that both of our dads owned boats.  My dad’s boat looked like this, but with more sparkles…. 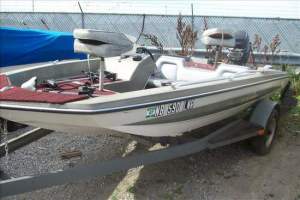 Hubby’s family was always much more reserved, his dad’s boat was pretty much like this too, with less sparkles.  This isn’t the greatest knowledge base. Going down river boats are not like bass boats.  We are not about to let that stop us.

Hubby has gather wood, fiberglass tape, and assorted construction materials. I have gathered a fresh coconut, pineapple juice, and have checked rum supplies.  I think we are ready to get started.

Someone asked me today what I would buy if I had $1000 to spend only on things I wanted for myself.  I didn’t have a single idea.  There are things I want, most of them cost less than $1000, but I couldn’t think of a thing that I would actually commit to spending that money on.

I’d like an e-reader and several hundred dollars for all those books I want to read.  It just seems kind of stupid to spend money on that when I just go to the library and get any book for free.

I’d like an awesome set of watercolor pencils, some paint and brushes, and assorted art stuff.  I just already have quite a bit of that kind of thing, and can really do whatever I want to do without anymore.

I’d like to go away for a nice weekend.  I just don’t have time even if I did have the money.

I’d like some new clothes.  I just don’t want to spend forever looking around for just the right thing.

The truth is if I did have $1000, I’d probably give it to my husband to spend on his truck, or just pay bills with it.

There are a lot of things I want.  I just don’t want them that bad.  I guess I’m not very good at taking care of myself.  I feel guilty filling up the bath tub if I’m not going to stay in it for at least an hour.  I’ll opt for a less expensive entree on a menu, even if the difference is only a couple of dollars.  I have a hard justifying the money spent to get my hair done.

I think I need some help.  Is there some kind self indulgence therapy group I could join?

We could all sit in a circle passing around advertisements for perfumes, spas, cruises, and gadgets while being told over and over that these things are actually real.  Eventually we could be exposed to the actual products.

We could participate in Retail Clearance Sign Avoidance Therapy where we were sent into clothing stores and made to touch, and even try on, in season, full priced items.

We could go to restaurants where we would be required to order, and actually eat, without sharing, both an appetizer and a dessert.

Until I find someone offering this kind of therapy, I guess I’ll just have cheese sandwich and a glass of water.